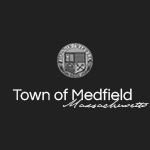 In the early Colonial period of our history, due to the fact that the first homes in Medfield had thatched roofs and on account of the great danger from fire, by law, every household was required to provide a ladder for his house or be fined.

In the early years of Medfield's history, the town was watched over by "watchmen" who circulated around the town to "watch" for any danger or fires.

We do not see any attempt at town-wide fire coverage until the 1820's. That is when the town obtained the first fire engine. We have been unable to determine the exact date of that first engine. The records simply say the engine was obtained several years prior to 1832.

The engine was kept in Woodward's barn, which was located, where the now stands. A lean-to was actually attached to the barn and this served as the engine house. With the first engine came the first engine company. This would put the date of the start of the in the late 1820's/early 1830's.

In 1834, residents voted $100 to build the town's first actual engine house. It was located near the where the Unitarian parsonage (the U-House) now stands.

The following year, a new two-story engine house was built on the north corner of North Street and Janes Avenue, next to the hat factory. Total cost was $600. It contained a meeting room for the Engine Company on the second floor. There were 26 firefighters in the Engine Company in 1854. For pay; the town cancelled the poll tax payment of $1.50 a year for all members of the Engine Company.

A new town hall was quickly rebuilt and a new fire engine and apparatus were purchased at the cost of $1,750; that is the engine now protected and in the possession of the Firefighter's Relief Association. A new engine house was again fitted up in the basement of town hall.

In 1877, a hook and ladder truck was purchased and equipped, at the cost of $300 and a second company was formed known as the Excelsior Hook and Ladder Company No. 1.

1879 saw the purchase of two 40-gallon chemical fire extinguishers that were procured for the use of the town at the cost of $90. Each member of the Engine Company and each member of the hook and ladder company received $7 annually for the year's service to the town. Total cost in the town budget was $360. This was the first time firefighters were paid directly by the town. Previous to this, firemen had only received the amount of their poll tax paid for.

In 1887, in cooperation with the Excelsior Straw Works on North Street (now site of the ), the fire department was able to use the steam pump at the hat factory and attaching hose to the hydrant (which is still located in the front yard of the building along North Street), they were now able to throw a stream of water upon the roof of the hat factory as well as the churches and businesses in the center of town. Piping was then installed and three hydrants were located in the center, giving the town fire protection in the downtown area.

In 1889, at the recommendation of the fire department, the town built two reservoirs, one on North Street and one on Pleasant Street for use of fighting fires. Pipes running from the Excelsior Straw Works filled both reservoirs. These reservoirs would give the town a greater central water supply. In the following years, the town would build additional reservoirs for fire protection at the corner of South and Pound Streets, and Main and Brook Streets. They were kept full by neighboring wells.

In 1907, selectmen appointed J. Allan Cole, Waldo Kingsbury and Fred Laverty engineers to the fire department. All three called for a more modern means of fighting fires and requested the town purchase a gasoline fire engine. Waldo Kingsbury of the department also voiced strong concern over the serious lack of available water needed to fight fires.

Unbeknownst to the fire department, the selectmen used the town fire whistle on New Year's Eve to blow in the New Year. Fire fighters responded to the whistle in full ranks including the horses only to find out that there was no fire. As the newspaper article says "madder set of men it would be hard to find when they discovered the real cause of the alarm. They are entitled to the usual pay and I trust that it will be granted by the selectmen without question, else they may fail to respond to future alarms when really needed."

For the first time in 1910, fire drills began to be practiced in the schools, taking place once a month and a new horse-drawn hose wagon was purchased, built by Cushmen and Baker carriagemakers, located along Baker's Pond.

In 1912, a telephone was installed in the engine room of the EV Mitchell Straw Hat Company to be used by the town exclusively for fire alarms. A whistle for the fire alarm was then located on the hat factory. It would stay there until 1930, when it was installed above town hall. Before this time the Unitarian and Baptist Church bells had been used for sounding fires.

During this time period the fire department was still using horse drawn equipment. The apparatus were stored in the fire station located underneath town hall. The horses were kept in the Willard Harwood Stable, where CVS is today. During a fire, the horses would have to be brought on the run from the stable, down Main Street, through the square and down the hill on Janes Avenue to the yard in the back of Town Hall.

The horses would then be attached to the apparatus and driven to the fire with bells clanging. Water for fighting the fires was purchased from the Medfield Water Company and was stored in the reservoirs or large cisterns located under the streets in various sections of the downtown area. The town would not have its own municipal water system until 1921.

At a special town meeting in 1919, $5,500 was voted to purchase the fire department a motor apparatus. With the purchase of the new motorized apparatus, the Medfield Hook and Ladder Company went out of existence after 42 years. The company was merged into the existing Engine Company and it has been that way ever since.

Town Meeting also voted the sum of $4,200 for the purchase of a Howe Reo 350-gallon motor pumping fire engine. Firemen's pay was now $12 per year and one dollar for the first hour fighting a fire and 75 cents per hour for each additional hour of fire work.

In 1923, for the second time in 50 years, . The fire occurred early in the morning of Jan. 17, during bitter cold weather. When the alarm came into the fire station, located in the lower level of town hall, it was reported that the dispatcher asked "Where is the fire" to which the operator responded "over your head." The entire inside of the building was gutted, leaving only a partial shell standing.

In 1924, Allen Kingsbury was again appointed chief. By 1928, the department's apparatus consisted of one motor chemical truck, one motor hose truck, one motor Reo pump and one horse-drawn pump. A Seagrave 600-gallon pump engine was added in 1929 at the cost of $8,000. In 1933, the Ford forest fire truck was purchased, replacing the 15-year-old chemical truck. To help battle forest fires, several water holes were constructed in remote parts of the town.

In February of 1961, the entire fire department was saddened by the death of Allen, who had called for the appointment of a permanent chief and was instrumental in the building of the new fire station on the corner of North and Dale Streets and moving the station from the cramped quarters underneath town hall.

Kenneth "Scratch" Clark was then appointed chief. The new North Street station opened in May of 1961 and a new 750-gallon Seagrave pumper went into service in October of 1961. Chief Clark continued the call for the appointment of a permanent chief and added the need for a full-time force and a ladder truck. During the early 1960's fire alarms increased more than 30 percent. Clark warned it was only the beginning and Medfield was no longer the small village but now a rapidly expanding suburban town.

Chief Clark retired in 1964 and was replaced by Walter "Hindy" Reynolds Sr. In 1966, two new pieces of apparatus were added with a new 750 gallons-per-minute(GPM) Pumping Engine and Medfield's first hook and ladder truck, which was purchased used from the City of Revere.

In 1969, as a result of town meeting action, Medfield finally established a permanent full-time fire chief. Chief Reynolds retired the following year after serving in the fire department for 46 years. Long-time firefighter Joe Ryan was appointed as the new chief. Ryan served with distinction until his retirement in July of 1988.

Chief Robert Hollingshead was hired as the interim-chief from 2017 to 2018 when Chief William Kingsbury retired.

Chief William C. Carrico II, was appointed in May of 2018.  That same year the town agreed to hire four additional firefighter’s paramedics and brought the department to the ALS level.  Now in 2021, we have two paramedics on each group and run four groups of three.  We have 16 call firefighters, nine are also EMT’s.  We average 1,400 calls per year with about 60% of that number medical calls.